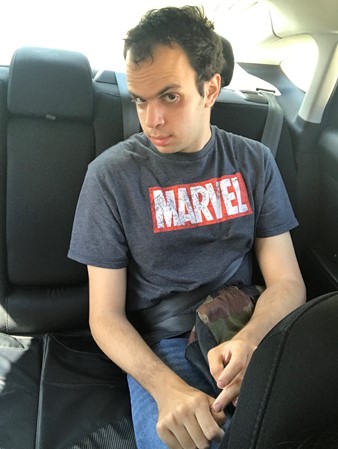 One day my husband said, “You know what? I think the biggest gift we can give Louis is his independence.”

We were living in California. Louis was attending The Help Group, a leading school for Autism in the USA  and, for us, the best place in the world for him.  He was celebrated and championed every day and we had full confidence in the program and staff.

The Help Group also ran four group homes where young people were given the chance to live independently with their peers. You had to be 18, there was a long waiting list and we saw it as an extension of The Help Group. Of course, we wanted this for our son.

The long waiting list is not so long when your child is calm, is not on meds, when you have a good relationship with the school, and when you beg all the right people to say all the right things.

Shortly after his 18th birthday Louis, aka “The Prince”, entered the group home.

He continued to go to school every day so the transition was not so hard on him. It was actually much harder on us because we were not allowed to see him for a month so he would settle in.  Staff called him “The Prince” because he was obviously very spoilt and very indulged.

I won’t say it was easy. He would come home at weekends and then refuse to go back because we loved him coming home and made it a party every weekend. Indulging him and spoiling him more than ever.

The group home staff had, of course, seen it all.

“Ellen, if you make it Xmas for him every weekend he has a hard time adjusting when he comes back… so cut it out!”

I cut it out.  But I did call all the time certain he was miserable, positive he missed us, sure he was confused, convinced he wasn’t eating.

This non-verbal young man starting speaking because he had to.  His parents weren’t around pre-empting every move and speaking for him.

He had a roommate who loved Disney movies as much as he did and they would go in each other’s rooms to watch movies together all the time.  His first real friend.

Was he hungry? Constantly. Like every other teenage boy. But there was no pandering to him.  At home he ate nothing except nuggets and fries. In the group home he would eat broccoli, salmon, tacos, noodles and everything put in front of him.

He also did his own laundry and had a list of chores.

One staff member painstakingly taught Louis to use Facetime on his iPad.  A huge breakthrough for us. Here he was calling us and picking up the call when we called him.

He asked us for a phone.  He tapped his pocket and said “Darren phone.  Michael phone.  Louis?”  So we got him a phone and he kept it in his pocket and felt cool. He also had a playlist: The Ramones, The Beatles, The Doors, Latin Rap.

I stopped buying him CDs of Disney musicals.

I see now how guilty we were of keeping him trapped in that world.  A “safe”, childish, happy world. The group home opened up a whole new universe and treated him like a young man. Everything was “age appropriate”. On movie night they would go to Marvel movies and Star Wars and Transformers.  He was no longer in a world of The Little Mermaid on repeat and Thomas the Tank Engine. A world we had him stuck in because “it made him happy.” Louis was now demanding Marvel Tshirts and knew every character from Star Wars while anticipating the next film.

There was a whole world out there while we had Louis trapped in a world of French Fries and nuggets, Cinderella, Snow White, and Disney Princess books.  Because we wanted him to be happy.

The Group Home was not about keeping him happy.  It was about setting goals, allowing him to live independently with the right support, stretching him, and letting him grow in an environment of respect.

He still came home every weekend (unless there was a party or special event) but he came home the way any typical young man comes home for the weekend.  With attitude, glued to his phone and wearing a Super Hero T-shirt that he had chosen himself.

Ellen Georgiou Pontikis is one of the founders of Voice for Autism. Her experience with group homes and day programs in California have given her valuable insight into how such programs can run effectively. She is committed to setting up a group home in Nicosia and advocating and creating work opportunities for the autistic community.